a weather map of folklore and facts

Painting the weather – a weather map of folklore and facts 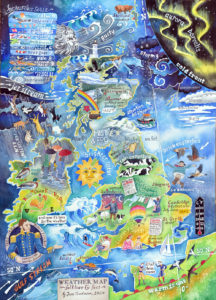 The weather turns up as a subject in its own right in my paintings quite frequently. It was inevitable that at some point I should make a painting of a Weather Map. In the past few years I have painted the Shipping Forecast, and even used the idea of a weather map to vent my anger, sadness and frustrations about Brexit.

On my weather map I have illustrated some of the facts, for example the hottest, coldest, windiest and wettest places, and also some  weather folklore.

What the weather going to do?

The British weather is famously changeable. It’s influenced primarily by two major factors. The Gulf Stream is an oceanic current drifting up from the Caribbean bringing warm waters. It’s predictable and constant. But the Jet Stream, a high altitude fast flowing air current, frequently wobbles and changes position. Between them, they bring the variation and changeability of the British climate that we all love and love to talk about. We get it all – rain, sun, wind, snow, and sometimes a lot of it in quick succession.

Here’s what you can see on my Weather Map painting 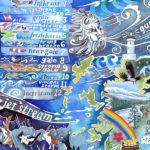 Beaufort scale – a measure of windspeed

The Beaufort Scale is a measure of windspeed and this can be seen top left. It’s not the first time I’ve illustrated this – it also turns up in my painting of the Shipping Forecast.

Over Scotland the wind is blowing hard over Cape Wrath lighthouse. The figure of Jack Frost flies in from the east, bring cold and stormy weather. At the top, the Shetland Isles is the windiest place in the UK, so I’ve put a little windswept pony. In the top right are the Northern Lights – they often be seen dancing in the winter night skies from Scotland. 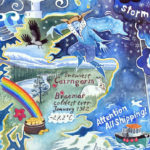 Jack Frost and the hooded crow

Scottish weather is amazingly changeable – and some of the best rainbows I’ve ever seen have been on the Isle of Mull and on Orkney. Over on the North East coast of England and Southern Scotland, the sea mist is rolling in from the North Sea. In Scotland this is known as ‘haar’ and in Northumberland as ‘sea fret’.

In Cumbria, Winnie the Pooh and Piglet are experiencing the only named wind of our islands, the Helm Wind. It’s raining cats and dogs in Northern Ireland, there are white horses in the Irish Sea. 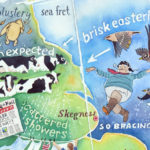 In Northern England all the cows are sitting down – a sure sign it’s going to rain. Over in Skegness there’s a bracing easterly breeze and so I’ve illustrated the Jolly Fisherman as seen on the poster created by artist John Hassall in 1908 for Great Northern Railways.

In the autumn the winter migrant birds fly across the North Sea from Scandinavia assisted on their amazing flights by easterly winds.

In Wales, there’s a shepherd who is delighted with the red evening sky- perhaps tomorrow it will be brighter tomorrow? 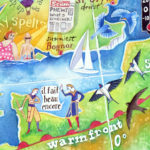 Southern England is the sunniest part of the British Isles. Bognor gets the more hours of sunshine than any other place, although Eastbourne comes a very close second, according to the statistics I’ve read.  In the far South West, the Isles of Scilly enjoy the mildest of Britain’s weather, bathed by the Gulf Stream. However the are also at the mercy of huge Atlantic swells. Shipwrecks are not uncommon. I remember well the news of the Penlee lifeboat disaster of 19 December 1981 which claimed the lives of 16 people, including the 8 volunteers crewing the RNBI lifeboat Solomon Browne. Appallingly sad. 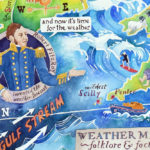 In the bottom left hand corner is Captain Robert FitzRoy. One of his many outstanding achievements was to actually invent weather forecasting. He founded the Meteorological Office – now known as the Met Office – in 1863. I blogged about him here.

Down in France, two Normans from the Bayeux tapestry pass the time of day: “Turned out nice again”. The swallows and swifts arrive for the summer.

A signed print of this painting at size A2 will be a perfect gift for weather watchers, and anyone obsessed by the weather.

Thank you for looking!

The Complete Works - my artistic output in 2020

"As the Crow Flies" - a signpost installation lockdown project